Feel the ground shake and the heavens opening-up? This is what happens when two two powerhouse music icons reveal that they're embarking on 'The Miraculous Supernatural 2020 Tour'! Witness a marvelous spectacle as Santana & Earth, Wind and Fire are up for an epic showdown of songs at the MidFlorida Credit Union Amphitheatre on Saturday 29th August 2020. Be ready with your smooth grooves as they take you to boogie wonderland. Get hold of tickets as soon as you can. They're hot and could easily slip right through your fingers. Click on the 'get tickets' link on this site and save your seat a.s.a.p. ! 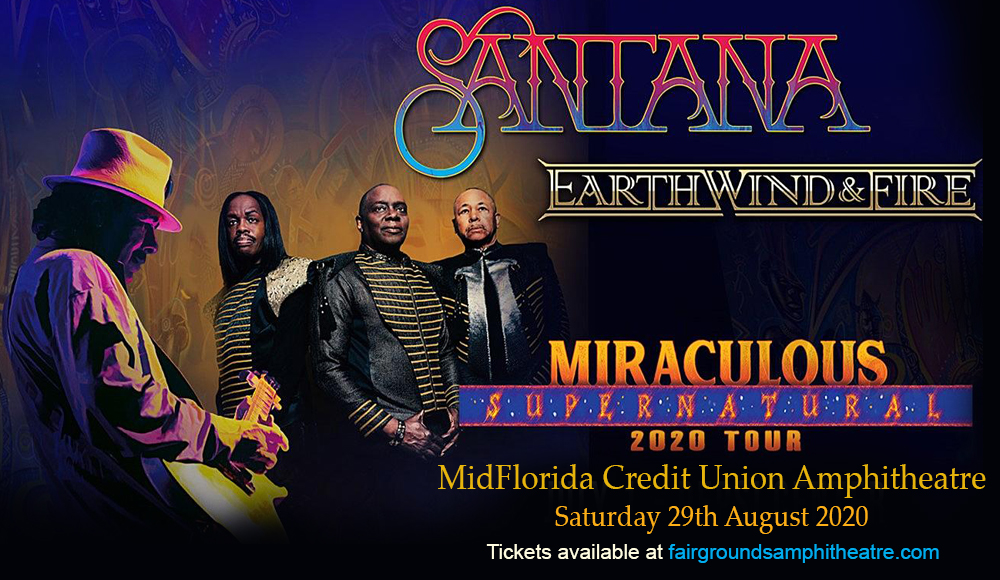 Earth, Wind and Fire's musical genres cover the expanse of R&B, soul, funk, jazz, disco, pop, rock, dance, Latin, and Afro-pop sounds. They are disco kings who could take you down "Boogie Wonderland" with dancefloor gems like "September" and "Let's Groove"; or they could take you for a ride down the soul train with the everlasting strains of "Reasons" and "After The Love Has Gone". It is not only fans who rave about them. The music press have also been dancing along to their infectious rhythms. Rolling Stone called them "innovative, precise yet sensual, calculated yet galvanizing" and declared that the band "changed the sound of black pop". VH1 has also described EWF as "one of the greatest bands" ever.

It takes two to tango, so they say… The other half of the supernatural force is none other than the one and the only, hailed as a Latin rock god is Carlos Santana, at the helm of the Chicano rock group Santana. Their appearance at 1969's Woodstock paved the way for stardom with monster hits like "Black Magic Woman", "Jingo", "Evil Ways", and "Oye Como Va". In 1999, Santana wound up new heights of commercial and critical success with the album "Supernatural", powered by its singles "Smooth", featuring singer Rob Thomas, and "Maria Maria". The album reached No. 1 in eleven countries and sold 12 million copies in the US. Shortly afterward, his album "Shaman" topped the charts again with the lead single "The Game of Love", featuring vocals from Michelle Branch, and debuted at number 5 on the Hot 100.

Together, they will rock and trip the light fantastic with their "Miraculous Supernatural tour".

“It is a great joy and honor to co-share music with the magnificent elements of Earth, Wind & Fire. We look forward to delight, joy and ecstasy!”, says Santana. “I feel like a 20 year old on stage playing with my band, and they deliver incredible energy on every song. When we hit the stage, we know we will touch your heart and make you dance, sing, cry, laugh and leave your worries and fears behind. The shows will feature the hits of yesterday, today and tomorrow…with energy!”

“We are excited to rock the USA alongside our friend Carlos Santana and his band with their off-the-chart musicianship and high energy show,” said EWF lead vocalist Philip Bailey. “We‘re going to bring the mighty elements of the universe to the stage and take fans on a journey they’ll never forget. This is gonna be a blast!”

Without a doubt, Santana & Earth, Wind and Fire's team-up is a winning combination. Don't miss it, book your tickets now!