Big sound, big hooks, and even bigger hair… Sammy Hagar and the Circle & Whitesnake are bringing larger-than-life vibes to MidFlorida Credit Union Amphitheatre on Saturday 11th July 2020, as they stop off for the night as part of their almighty double-headliner tour! Both bands have strong rock ancestry, and legacies to match, and both groups are known for their bombastic and exhilerating live shows, that get fans singing along like crazy! If you're a true rock fan, then this is the show for you! Plus, they'll be joined by the incredible Night Ranger in support! 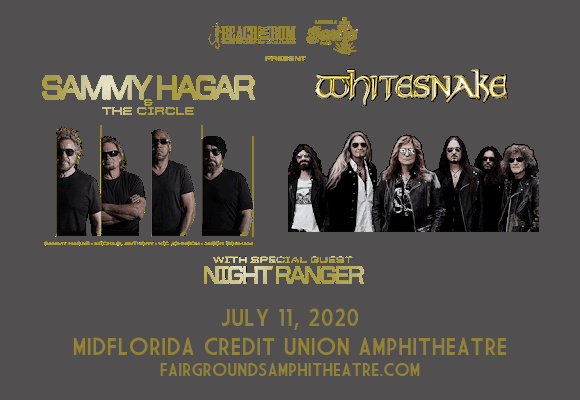 After his departutre from British hard rock band Deep Purple, vocalist David Coverdale started Whitesnake. The band was formed in 1978, and several of its core members had worked with Coverdale on his solo album White Snake, and had been known as The White Snake Band. The group had moderate success with two album in the late-1970s, but it was in the 1980s that they hit their stride, with a string of top 10 albums in the UK: Ready an' Willing (1980), Come an' Get It (1981), Saints & Sinners (1982) and Slide It In (1984). Three years later, the group had its biggest success with a self-titled album, which went eight-times platinum in the US, and was also hugely successful in the UK, earning them a nomination for the 1988 Brit Award for Best British Group. The album also launched two US hits: "Here I Go Again" and "Is This Love", which reached number one and two on the Billboard Hot 100, respectively. Their following album, Slip of the Tongue (1989), was also a platinum-selling top 10 hit in both the US and UK. Not long after, the band parted ways, but breifly reunited several times over the years, releasing the one-off album, Restless Heart, in 1997. In 2002, Whitesnake officially reformed, and they have continued to tour and record ever since, releasing four subsequent albums: Good to Be Bad (2008), Forevermore (2011), The Purple Album (2015) and Flesh & Blood (2019).