Popping out onto the live concert stage is a 'rapstar' whose mad skills have brought him to the top of the charts and now on to the "Hall of Fame". That's right, Chicago's drill-trap rap artist Polo G is now crisscrossing the country and touching down on key cities, loaded with ammunition of hit songs for his current "Hall of Fame" tour. Polo G is aimed to hit the MidFlorida Credit Union Amphitheatre on Saturday 18th December 2021. This is gonna be a riot for rap music fans! Rabid fans will surely gang up to get first dibs on tickets to the show. Act quickly by clicking on that 'Get Tickets' sign on your screen. Lock those tickets in right here, right now! 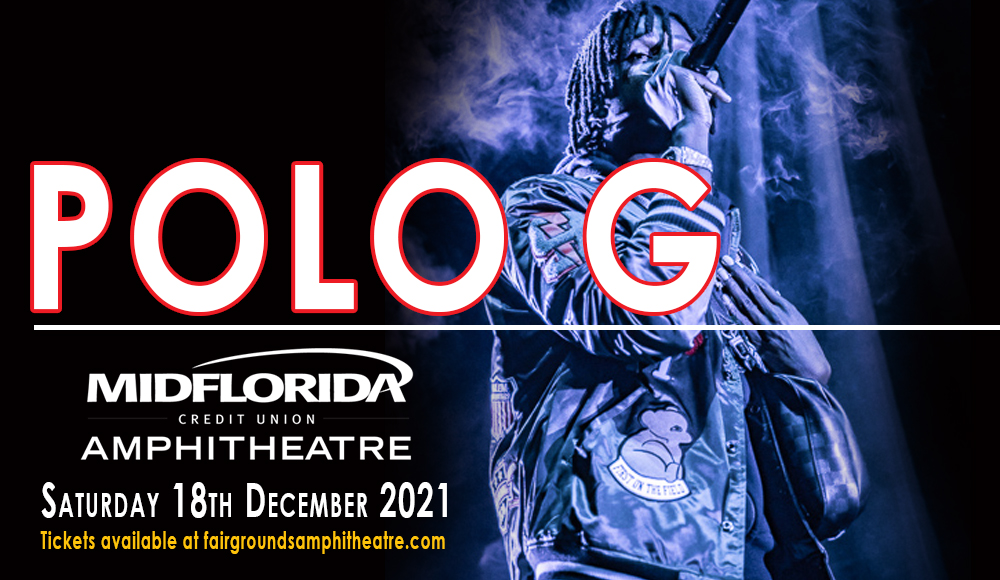 It takes guts and gusto for such a young aspiring rap artist to figuratively and literally drop everything, including a promising university acceptance, to pursue a music career full time. Polo G uploaded his first recording "ODA", on YouTube; then he released the track "Gang with Me" on Soundcloud which quickly racked up millions of plays. He continued garnering millions of views with songs like "Welcome Back" and "Neva Cared", "Finer Things", a song he wrote while incarcerated.

Yet Polo G aimed at popping out into a more mainstream platform and he actually did "Pop Out", a track featuring Lil Tjay which peaked at number 11 on the Billboard Hot 100, with its music video raking in over 200 million views on YouTube and led to him inking a record deal with Columbia Records. His debut album "Die a Legend" released on June 7, 2019, peaked at number 6 on the Billboard 200.

Polo G then kept the ball rolling as his sophomore album "The Goat" (2020), peaked at number two on the Billboard 200 and spawned ten charting singles on the Billboard Hot 100 chart. Polo G whose stars are starting to align for stardom released the single "Rapstar", which debuted at number one on the Hot 100 and became his first number one hit on the Hot 100 and first solo top-ten single. The song served as the lead single for his third studio album "Hall of Fame" (2021), which became his first chart-topping album.

The "Hall of Fame" tour is ready to pop out and Polo G exclaims, "I’m excited to head back out on the road and perform all of these songs for my fans for the first time," he said in a press release. "Die A Legend tour was big but this will be even bigger."

Mark this date, and book your Polo G tickets now!