Two legendarys band that dominated the airwaves throughout the 1980s, Journey & The Pretenders, will be bringing their mammoth tour to MidFlorida Credit Union Amphitheatre on Friday 21st August 2020! Journey are no strangers to being on the road and each year they can be relied upon to provide a mighty show with stellar support – it looks like their 2020 tour will be no different! Both band have been inducted into the Rock and Roll Hall of Fame and exemplify a rock and roll attitude and talent that's endured throughout the decades!

Journey's Jonathan Cain had this to say about The Pretenders' frontwoman Chrissie Hynde: "I mean, she is ageless, kind of like [Heart's] Ann Wilson. You hear her and think, yeah, still sounds like the record." 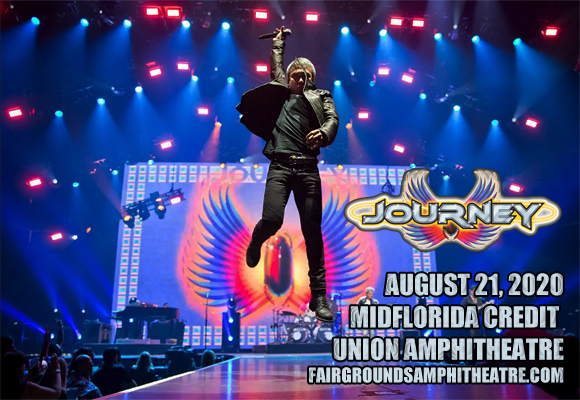 Journey are one of the world's best-selling bands of all time, and the 25th best-selling band in America. Known for their anthemic arena rock, they were formed in 1973 by several ex-members of Latin rock band Santana and psychedelic rock band Frumious Bandersnatch, and originally had their roots in progressive jazz fusion. Over time, however, the band's musical direction changed to a more commercial style, helped in part by the addition of lead singer Steve Perry in 1977. The resulting album was 1978's Infinity, which redefined their sound and led to a string of seven multi-platinum albums between 1978 and 1987. Journey's line-up has changed throughout the years, but their status as one of the US' best-loved rock bands remains.