EVENT CANCELLED. We regret to inform you Halsey has cancelled her scheduled 2021 tour. Please request a ticket refund from your point of purchase.

Halsey doesn't fit easily into a pigeonhole – her voice is equal parts mighty and soft; her music draws from pop, rock, hip hop and R&B; she's as socially responsible as she is glamourous… A one-of-a-kind artist whose live perfomances prove her to be equal to the pop queens that came before her, she'll be headed to MidFlorida Credit Union Amphitheatre on Wednesday 22nd July 2020 as part of her Manic Tour, thrilling fans with her wildly entertaining show! Tickets will sell fast for this magnetic and raw performer – grab yours while you can! 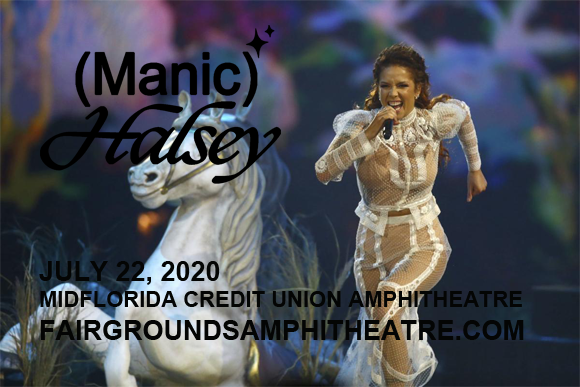 New York-based alternative pop singer and songwriter Halsey took the internet by storm in 2014 with her self-released single "Ghost", which became popular on SoundCloud and drew the attention of several record labels. She signed with Astralwerks and released her debut EP, Room 93, later that year, hitting number three on the Billboard Heatseekers chart. Her platinum-selling debut studio album, Badlands, was released in 2015, launching four platinum-selling singles: "Ghost," "New Americana," "Colors," and "Castle." Her profile was raised even further with her collaboration with EDM duo The Chainsmokers on the single "Closer", which topped the charts in 15 countries and was certified diamond in the US. Her 2017 sophomore album, Hopeless Fountain Kingdom, featured collaborations with Sia, Greg Kurstin, and Benny Blanco, and topped the Billboard 200, launching two top 20 singles. "Without Me," the lead single from her upcoming third studio album Manic, is Halsey's first number one single on the Billboard Hot 100 chart as a main artist.