Grammy Award-winning country folk mavericks Zac Brown Band are heading out on tour once more, and they're coming to MidFlorida Credit Union Amphitheatre on Sunday 24th September 2017! Their up-coming album Welcome Home, takes the band back to their roots, so expect some knee-slappin', toe-tappin', first-rate music from this phenomenal band! 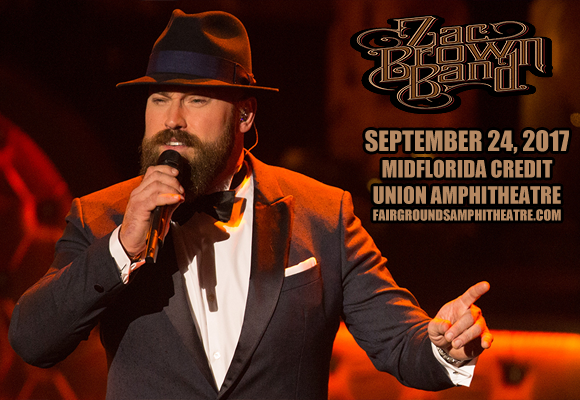 Zac Brown is an American country singer, songwriter, bandleader, producer, label manager and philanthropist. Brown's music career began in high school and by 2002 he had a band together, playing around 200 dates a year. 2003 saw the release of Zac Brown Band's first independent album, Home Grown. Their debut major label album, The Foundation (released in 2008 on Atlantic Records), was certified triple-platinum by the Recording Industry Association of America, while its follow-ups, You Get What You Give and Uncaged, are certified platinum. To date, the band has released six studio albums, three of which have been in collaboration with Atlantic Records, as well as two live albums, one greatest-hits album, and two EPs.