It's high-energy hip hop at its best as Wiz Khalifa & Rae Sremmurd touch down at MidFlorida Credit Union Amphitheatre on Thursday 16th August 2018 as part of their Dazed and Blazed co-headlining summer tour! The hit-making, doobie-loving rap acts will be joined by Lil Skies and O.T. Genasis in support, providing a killer line-up for this epic show! 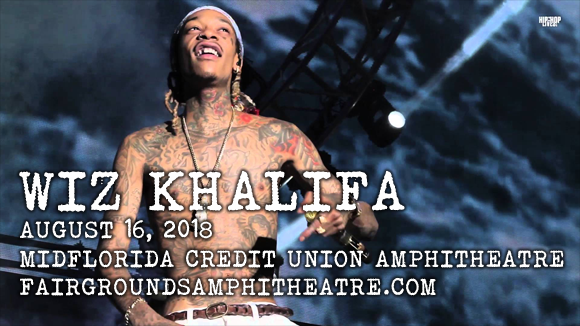 American rapper and actor Wiz Khalifa released his first mixtape, Prince of the City: Welcome to Pistolvania in 2005, paving the way for his first full-length album, Show and Prove, the following year. Follwing the succes of Show and Prove, Khalifa signed to Warner Bros. Records in 2007, finding success with the single “Say Yeah”. After parting ways with Warner Bros., Khalifa signed with Atlantic Reocrds in 2010, releasing the single "Black and Yellow", which peaked at number one on the Billboard Hot 100 making him a mainstream hit. His long awaited seventh studio album, Rolling Papers 2, is slated for a 2018 release.