Music can be different things for different people. Some want to be entertained; for some, it's a journey, a destination, or just merely passing through; for others, it could be life-changing. Whatever music is to you, there is a Thomas Rhett song out there to see you through…Now take this chance to experience this extraordinary singer-songwriter live, as he takes center stage at the MidFlorida Credit Union Amphitheatre on Friday 19th June 2020. Fans, followers, or whatever state of appreciation you're in, Thomas Rhett has got that right song that hits the spot. And with a little help from his equally talented friend, Cole Swindell, as guest performer, this sure will be one helluva great ride. Book those tickets now! 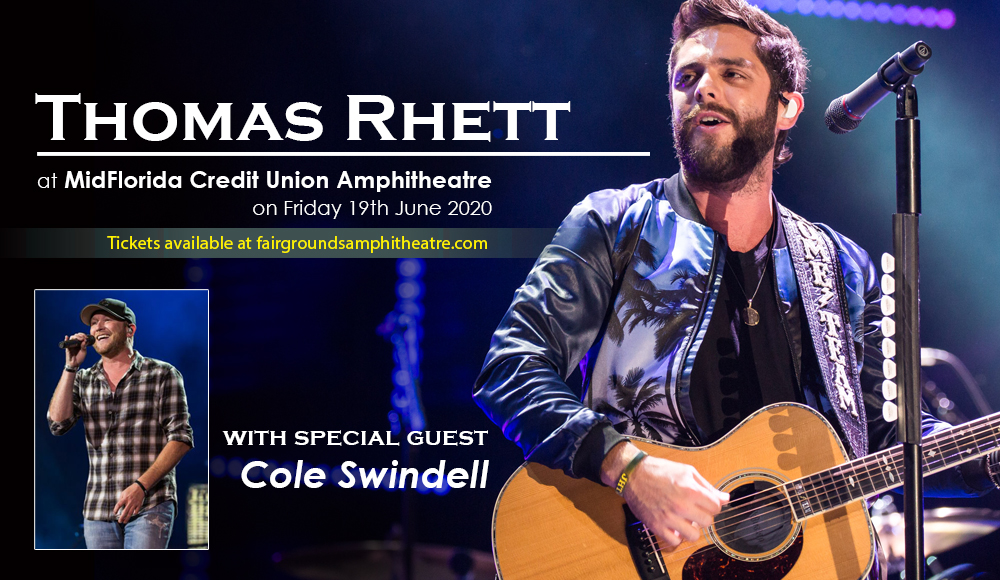 Thomas Rhett is destined for artistic greatness and superstardom. Yet he tried to fight his way out of this destined path. He exercised resistance by getting involved in anything other than music — Kinesiology, business, anatomy, media…but his efforts were futile.

Singing and songwriting were for Thomas, came as naturally as breathing. The moment he embraced these talents, all roads opened up, everything fell into place. When he signed a songwriting deal, his composition landed on Jason Aldean’s "My Kinda Party" album, a double-platinum, best-selling country album of 2011. As he hopped from one music label to another doing auditions, he was stumped with a problem — all seven of them wanted him to sign up! Thomas Rhett is baffled but is now going with the flow. “I don’t have a clue where it’s going to go or where it’ll end up, but the journey is cool enough for me,” he muses. “I’m here for the ride and to entertain people.”

His first single, “Something To Do With My Hands,” reveals his eclectic style. “Country, rock and hip-hop were what I was raised on,” Thomas Rhett says. “It’s a strange combination, but it all leaks into what I write.”

Thomas Rhett is still trying to make these all sink in. “I think I’ve been directed here for a reason,” he surmises. “I still don’t know why. I don’t know if it’s to be some big star or if it’s to make a difference in somebody’s life along the way or to make somebody’s Friday night entertaining. It doesn’t really matter. It’s a journey, and I’m learning something new every step along the way.”

If you want to enjoy music just the way you want to, this concert may be just the right one for you. Now dig in and book those tickets now!