Definitely a big night to remember, as The Jonas Brothers officially announced their "Remember This" tour that would take them all around the country. And yes, their tour itinerary includes a one-night-only show here at the MidFlorida Credit Union Amphitheatre on Saturday 16th October 2021. The Jonas Brothers, who have kept fans giddily singing along to their smash hits "That's Just the Way We Roll," "Hold On," "Play My Music," "Tonight," "Burnin' Up" ,"Cool", and their number one Billboard chart hit "Sucker", has also made another milestone as their tour banner single "Remember This" will be on NBC’s promotional campaign for the Tokyo Olympics this summer. The Jonas Brothers are reputed to sell out concert tickets in a flash. Beat the clock by just clicking on that 'Get Tickets' sign to book your tickets now! 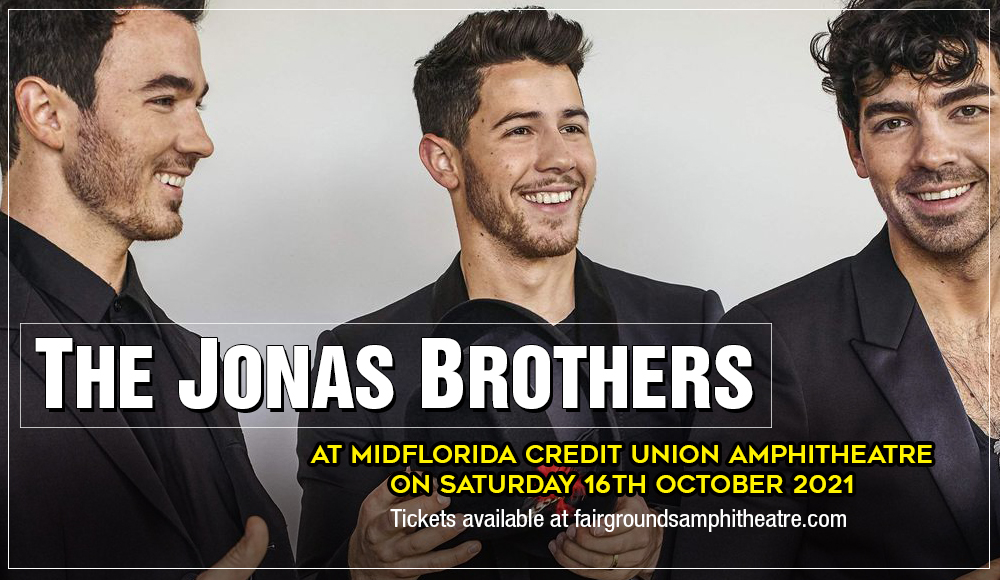 The Jonas Brothers have always been like family to the millions of households who've seen them grow up right before their very eyes. Formed in 2005, Kevin Jonas, Joe Jonas, and Nick Jonas gained popularity from their appearances on the Disney Channel television network. They starred in the Disney Channel Original Movie Camp Rock and its sequel, Camp Rock 2: The Final Jam. They also portrayed characters parallel to themselves in their own Disney Channel series "Jonas:" which was rebranded as "Jonas L.A. "

Amidst their TV acting stints, the Jonas Brothers have always put their music at the forefront. The group was nominated for the Best New Artist award at the 51st Grammy Awards and won the award for Breakthrough Artist at the American Music Awards. As of May 2009, before the release of Lines, Vines and Trying Times, they had sold over eight million albums worldwide. They were one of the earliest celebrities whose popularity was further boosted by social media. Their followers as a group boomed to the multi-million mark.

And just like any other family, the brothers also took a two then a six-year-long hiatus to pursue individual careers and projects. They refocused their creative energies which made the bond of family come back tighter, stronger, and bolder, reuniting and resurfacing with an electrifying sound combining elements of pop, rock, classic R&B, techno and dance genres. The result was the release of "Sucker" on March 1, 2019. Ranked as the 34th song in history to debut at number one on the Billboard Hot 100, and became the Jonas Brothers' first number one single on the chart.

The burst of Jonas energy hasn't waned down since. The Jonas Brothers are at the top of their game in both the recording and concert scenes. And as the world opened up again, expect the Jonas Brothers to deliver an explosive show like never before. “We couldn’t be more excited to officially announce we are going on tour this summer and bringing our friend Kelsea Ballerini!” the Jonas Brothers said in a statement. “If this past year has taught us anything it’s that we need to remember the important moments in our lives. We hope these shows will be special moments for our fans, our friends, and our families and we can’t wait to see all their faces soon!”

But first remember this: Get your tickets now!