If you love gothic and hard rock, we’ve got the ultimate show for you!! Coming up – it’s The Cult, live at the MidFlorida Credit Union Amphitheatre on Wednesday 8th August!! Don’t miss out – hit the “Buy Tickets,” button and get yours today!! 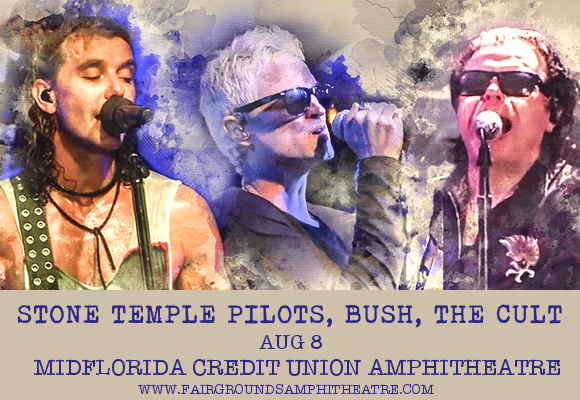 Formed in 1983 and performing initially under the name “Death Cult,” a shortening of singer Ian Astbury’s previous project “Southern Death Cult,” and eventually shortening even further, The Cult gained huge popularity on the UK underground gothic and alternative scene with singles including “She Sells Sanctuary,” and later gained mainstream popularity as a hard rock act in the United States with singles including “Love Removal Machine,” and “Fire Woman.”

Now, the band are touring with their latest album, “Hidden City,” an album that seems to fittingly span the course of the band’s history, featuring each distinct sound of The Cult. “When we go out on the road, everything is around the show,” Ian Astbury said, when asked what fans could expect from the upcoming tour from the veteran dark rock band. “Everything is focused on the performance – we bring everything to that performance. We grew up in a performance-based music scene….there was so much immersion, so much cultural diversity and sharing of ideas, and so much community, and that’s never changed for me.”

The Cult experiences promises to be every bit as incredible as it’s ever been before – so don’t lose out!! Get your tickets to see The Cult NOW while they last!!