Three classic rock heavyweights are banding together this summer for one incredible stint on the road: Styx, REO Speedwagon & Don Felder comes to MidFlorida Credit Union Amphitheatre on Tuesday 18th July 2017 as part of the United We Rock Tour!!! A night of epic riffs and radio hits, this show will be fun, spectacular and badass! 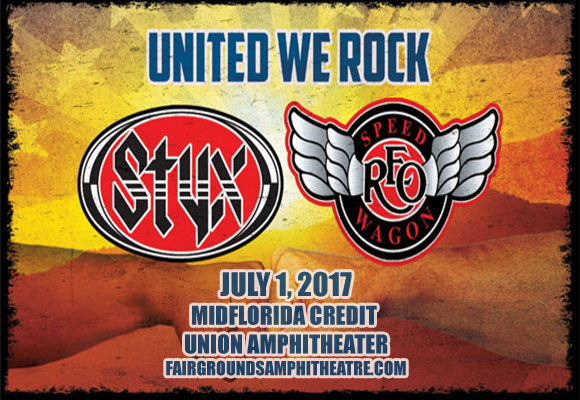 REO Speedwagon formed in 1967, in Champaign, Illinois. Signed to Epic Records in 1971, the band released their eponymous debut album the same year. Having released several albums and built up a following from live performances throughout the early and mid 1970s, the band had their first platinum-certified record with the 1977 live album Live: You Get What You Pay For. The band's following album, 1978's You Can Tune a Piano but You Can't Tuna Fish, went double platinum, but it was 1980s Hi Fidelity that marked a change in musical direction for the band and brought REO Speedwagon widespread success. Launching four US Top 40 hits, it is the group's best-selling album, with over ten million copies sold. The band has sold more than 40 million records to date,and has charted thirteen Top 40 hits, including the number ones "Keep On Loving You", "Take It on the Run", and "Can't Fight This Feeling".