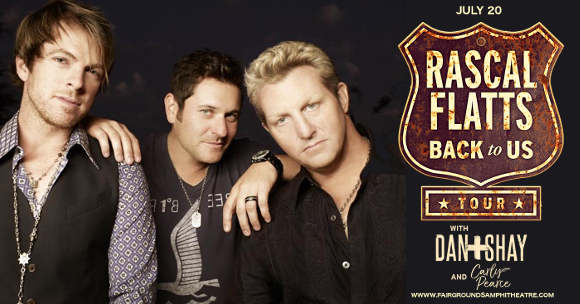 Formed by Gary LeVox, Jay DeMarcus and Joe Don Rooney in 1999, country-pop act Rascal Flatts achieved huge success with their self-titled debut, with four singles appearing on the Billboard Country Charts. Since then, they’ve hit number one with a single from each and every album they’ve released!!

“I can’t describe how much we are looking forward to the tour this summer!” Gary LeVox enthused. “We’ve been lucky enough to be in a position to tour consistently throughout our career, and last year felt like the perfect time to reset as we focused on the release of our 10th album. Coming back this year and with our friends Dan + Shay, who are some of the best guys around, as well as Carly who had an amazing year last year, makes it all the more exciting! It’s going to be an awesome time for us and the fans!”

We can hardly wait – can you?? Be quick about grabbing those tickets, they won’t last long!!