Finished with world touring 'cause it couldn't help him with his mind…? Heavy metal icon Ozzy Osbourne comes to MidFlorida Credit Union Amphitheatre on Sunday 2nd June 2019 on his No More Tours 2 tour! The legendary singer is retiring from his round the world stints, and he plans to go out with a bang, treating fans to a set choc full of Ozzy at his very best! Joining the bat-munching showman in support is heavy metal behemoth Megadeth! 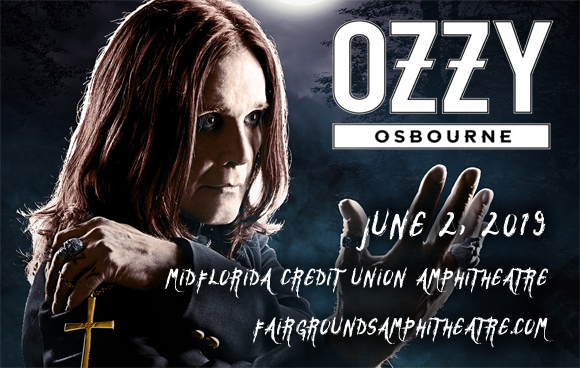 Godfather of Heavy Metal, Ozzy Osbourne, is best known as the frontman of British heavy metal band Black Sabbath (1967 – 1979), who are often credited as changing the course of music history with their debut album, which is widely regarded as the first heavy metal album ever made. Osbourne is also known for his wildly successful solo career – he has released 11 solo albums since his departure from the band, with the first seven solo albums consecutively earning multi-platinum certification in the US. With his Black Sabbath and solo releases combined, Osbourne has sold over 100 million albums worldwide. Not only has he been inducted into the Rock and Roll Hall of Fame as a member of Black Sabbath, but Osbourne has also been inducted into the UK Music Hall of Fame twice – once as part of the band and once as a solo artist. At the 2014 MTV Europe Music Awards, he won the Global Icon Award, and the following year he was awarded the Ivor Novello Award for Lifetime Achievement from the British Academy of Songwriters, Composers and Authors.