Rock fans get ready as one of the biggest bands from the 2000's takes to the road to bring their classic hits to the stage! That's right – Nickelback will be stopping off at MidFlorida Credit Union Amphitheatre on Tuesday 1st August 2017! It's time to book your tickets for a night of unforgettable epic music, as they will also be joined by special guest – Daughtry. ON SALE NOW! 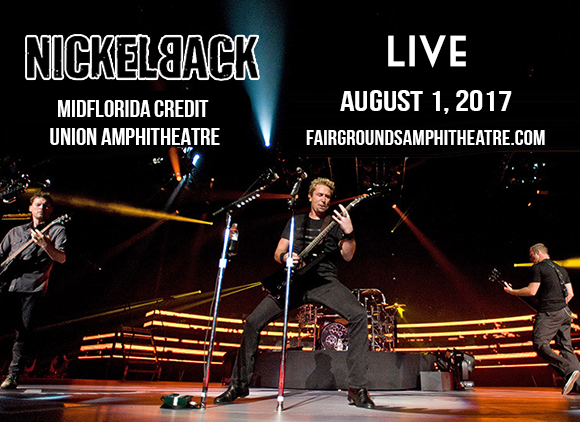 During the early 2000's, Nickelback were the talk of the entire music scene as they brought their chart topping anthems to the public eye, songs such as "How You Remind Me" were unavoidable as they exploded onto rock radios and music channels around the world! After their major breakthrough, Nickelback continued to produce successful hit after another, including, “Photograph" and “Rockstar!"

Now as we fast forward to almost 20 years later, Nickelback continue to bring all of their classics to perform a live show like no other as fans gather around for 2017 as they hit the road once again – don't miss out! These rockers have 50 million album sales under their belt and have been ranked previously by Billboard as one of the most successful acts of their decade. Don't wait around as tickets are bound to sell fast for their Summer-Fall dates.