With his Eminem-inspired flow, powerful lyrics, and huge hits like "Let You Down", NF (aka Nate Feuerstein) is a must-see live act for fans of confessional hip-hop! The award-winning, chart-topping rapper comes to MidFlorida Credit Union Amphitheatre on Tuesday 5th October 2021 as part of his Clouds Tour! This will be his first stint on the road in two years, so fans will be thrilled to finally hear tracks from Clouds (The Mixtape) live! 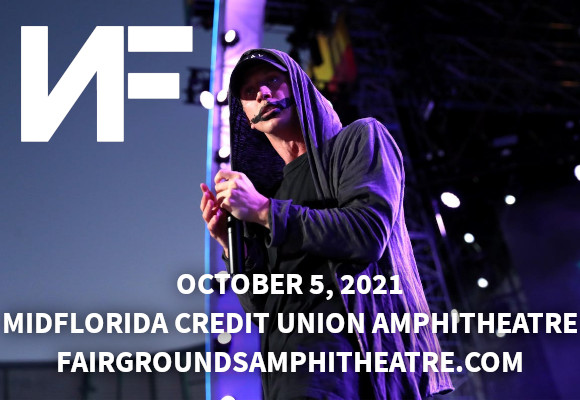 Nate Feuerstein, aka NF, first began to rap as a way of escaping a turbulent home life, but began to see it as a career path when his self-released debut album, Moments (2010), led to an independent record deal. A self-titled EP followed in 2014, charting in the top-15 of the Billboard Christian, Top Gospel and Top Rap albums charts – a sign of his crossover appeal. Both NF’s debut and sophomore albums – Mansion (2015) and Therapy Session (2016) – topped the Billboard Christian Albums chart, with the latter also reaching number one on the Rap Albums chart. In 2017, he released his third studio album, Perception. Perception was a huge commercial success, debuting at number one on the Billboard 200 and gaining platinum certification, making him a household name. The album launched several singles, including "Let You Down", which went five-times platinum, reached number 12 on the Billboard Hot 100, and topped the Hot Christian Songs chart. The Search, NF’s 2019 album, also topped the Billboard 200 upon release. It was preceded by the singles "Why", "The Search", "When I Grow Up" and "Time". In March 2021, he released Clouds (The Mixtape), which reached the top-three on the Billboard 200, Christian Albums and Rap Albums charts.