Get ready for one of the most astounding rock shows you will ever see, as the unparalleled Muse head to MidFlorida Credit Union Amphitheatre on Sunday 21st May 2017! The British stadium rock icons will be performing as part of their extensive 2017 tour, alongside Jared Leto's 30 Seconds To Mars, bringing a show that will shock the senses and tunes that will blow you away!!! 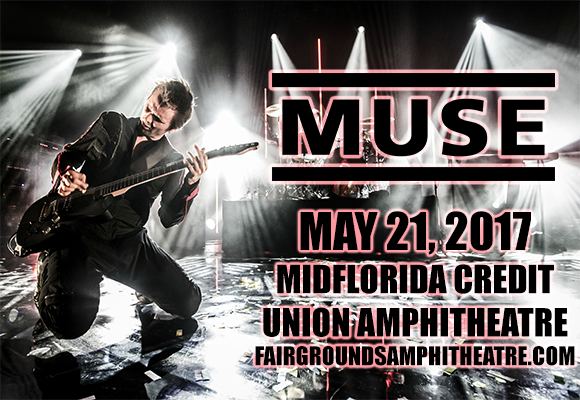 With worldwide sales of over 20 million, plus two Grammy Awards (Best Rock Album for The Resistance and Drones), two Brit Awards (Best British Live Act twice), five MTV Europe Music Awards and eight NME Awards, British band Muse are huge in the rock world. Formed in 1994, they released their debut album, Showbiz, in 1999. Two years later, Origin of Symmetry launched the band into the limelight, peaking at number 3 in the UK Albums Chart, and going on to be certified platinum by the RIAA. The band's 2003 album Absolution marked the first of five consecutive UK number-one albums from the band. Their seventh studio album, Drones, was released in 2015.