Two chart topping rappers will be going back-to-back for a co-headlining tour thaat brings the very best of hip-hop to the stage! The Legendary Nights Tour comes to MidFlorida Credit Union Amphitheatre on Monday 23rd September 2019 and features headline sets from Meek Mill and Future, as well as a stacked support line-up from YG, Mustard, and Megan Thee Stallion! Believe the hype – this ish is gonna be tight!!! 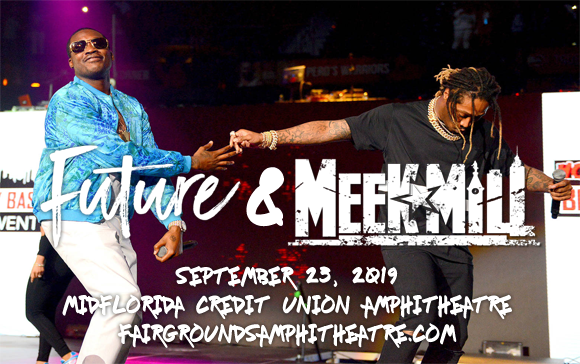 Since releasing his debut album, 2012's Dreams and Nightmares, Philadelphia-based rapper Meek Mill has been taking the rap world by storm. 2012 also saw Mill start his own imprint label, Dream Chasers Records, and he has since released three studio albums on the label, his most recent being Championships (2018). He's also known for his incredible appearances on MMG's Self Made compilation series, which launched the singles "Tupac Back" and "Ima Boss".

Future is a Grammy Award-winning rapper, singer, songwriter and record producer, who began his career as part of the Dungeon Family Collective alongside Outkast, Cee-lo Green and several other prominent Atlanta-based rappers. Since his 2012 debut album, Future has released six recordings that debuted at number-one on the US Billboard 200, including: DS2 (2015), What a Time to Be Alive (2015) (in collaboration with Drake), EVOL (2016), FUTURE (2017) and HNDRXX (2017). the latter two releases made him the first artist to debut two albums in consecutive weeks at the top of that chart.