Matchbox Twenty are back on tour for the first time since 2017, and they're coming to MidFlorida Credit Union Amphitheatre on Saturday 8th July 2023 (Rescheduled from Saturday 9th July 2022) (Rescheduled from Friday 6th August 2021) as part of their mammoth 50-state 2022 summer tour! This is a huge deal for fans of the alt-rockers, who are experiencing a huge resurgence after traversing a number of hiatuses and line-up changes, and are returning to the stage with a bang! Expect a set-list of classic radio hits from the group, as well as a few extra special surprises – you'll be glad you didn't miss it! 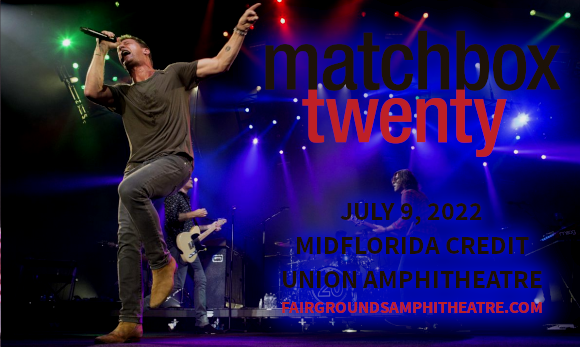 Fronted by three-time Grammy Award-winning singer and songwriter Rob Thomas, alternative rock band Matchbox Twenty is best known for its hits “Real World,” “Back 2 Good” and the number one singles “Push” and “3AM.” The group formed in Orlando, Florida in 1995, and had huge success with its debut album Yourself Or Someone Like You, which was released the following year. Yourself Or Someone Like You was certified 12-times platinum (diamond) in the United States, as well as multi-platinum in Australia, Canada, and New Zealand, and secured the band's place as kings of the airwaves with a significant amount of radio play. Mad Season (2000), their sophomore album, was another multi-platinum hit and spawned several successful singles, and their third studio album, More Then You Think You Are, was certified double-platinum. After that release, the band experienced a few hiatuses and line-up changes, before reuniting in 2012 for their fourth album, North. The band's 2020 tour with The Wallflowers is their first in three years.