Thereʼs so much anticipation brewing at MidFlorida Credit Union Amphitheatre as the rumors have been confirmed to be true! Lynyrd Skynyrd has announced it is coming live to MidFlorida Credit Union Amphitheatre and you can grab the chance to be there! Book here for tickets to Lynyrd Skynyrd on Saturday 5th May 2018 – this is their LAST EVER TOUR, don't miss out!! 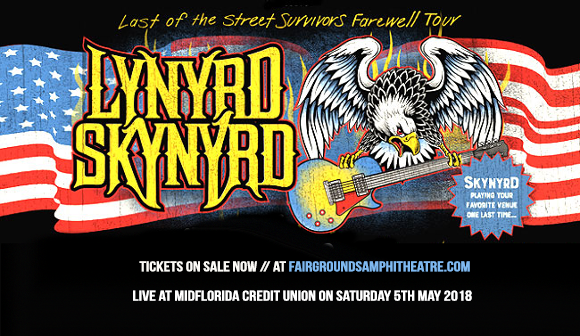 The American rockers, Lynyrd Skynyrd are one of the biggest groups to walk the earth! As part of the Southern rock genre during the 1970s. As they first created the band all the way back in 1964 in Florida. Their live performances were the talk of the town and their greatest songs put them on the musical map for their entire long standing career up until this date.

Tracks such as "Sweet Home Alabama" and "Free Bird" – have become legendary in their own right along with the band. But the songs have taken to be some of the most well known of all time and are almost above their status. Showcasing just how talented their songwriting abilities are.

In 2018, almost 55 years later, Lynyrd Skynyrd continues to tour and record with their co-founder Gary Rossington, Johnny Van Zant, and Rickey Medlocke. But alas, this year also marks their FINAL ever tour, this is your very last chance to catch them live – grab your tickets above and let your friends know, any Lynyrd Skynyrd fan should be there!!

Come and say farewell in style….