If you love hip-hop then get ready for the show of your life!! It’s time for The Bobby Tarantino vs. Everybody Tour, the massive North American headlining jaunt by Logic, featuring special guests NF and Kyle! They’re on their way to the MidFlorida Credit Union Amphitheatre on the Friday 22nd June 2018 – tickets available NOW!! Don’t miss out – grab yours while they last!! 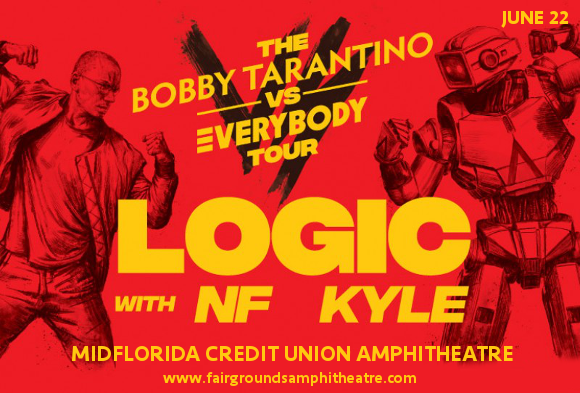 Revealing the new mixtape via a promotional 2-minute video featuring the characters Rick And Morty from the popular series of the same name, “Bobby Tarantino 2” was preceded by the single "44 More” in February before the mixtape was dropped in March. Described by Pitchfork as “blessedly lighter on its toes and more entertaining than his overambitious albums, doing far more with far less,” the album has been a phenomenal success so far, with sales of 119,000 album units landing it at the top of the Billboard 200, his second album to achieve this after “Everyday,” released barely half a year beforehand!! “Bobby Tarantino 2,” is the sequel to his 2016 mixtape “Bobby Tarantino,” and features Logic’s alter-ego Young Sinatra in addition to Wiz Khalifa, 2 Chainz and Big Sean. The album’s third single, “Everyday,” is a collaborative effort with the masked DJ/producer Marshmello.

Get ready to experience all the new songs live – have you got those tickets yet??