It’s gonna be a summer of celebration for alternative rock music fans this year. Celebrating the twin 25th anniversaries of their groundbreaking albums, Live and Bush are embarking upon “The ALT-IMATE Tour”, with special support from Our Lady Peace, who are also celebrating the 25th anniversary of their debut LP! This amazing line-up heads to the MidFlorida Credit Union Amphitheatre on Friday 16th August 2019 – make sure you’re there!! Tickets on sale now – get ‘em while they last!! 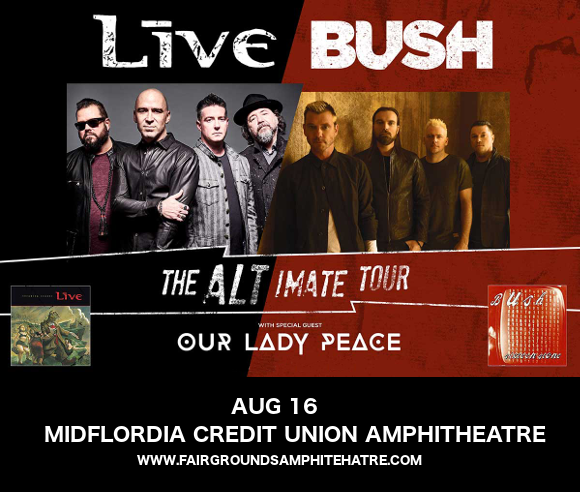 Over the years, both Bush and Live have made a huge impact on the alternative rock scene, each becoming iconic in their own right. Bush’s incredible debut album “Sixteen Stone,” turns 25 this year – fans can expect to hear songs like “Glycerine” and “Machinehead” on tour. As for Live, they’ll be performing classics such as “Lightning Crashes” and “I Alone” in celebration of their second and breakout album, “Throwing Copper”.

"Bush is a great band and Gavin (Rossdale, Bush frontman) is a super passionate singer and performer. I'm really looking forward to spending the summer with them. I know the fans are going to get one hell of a show,” Live said in a press release, while Bush were similarly enthusiastic, stating; “We are thrilled to be touring this summer with Live. The wealth and depth of songs from both bands should provide a great night of music. Looking forward to seeing you all this summer!”

If you’re fast enough to grab tickets, that is – do you have yours yet?? Hurry – they won’t be around for long!!