Three-time Grammy Award nominee and trap star Lil Baby is back on the road and raring to go with his massive Back Outside Tour, which features partner-in-rhyme Lil Durk as a special guest and comes to MidFlorida Credit Union Amphitheatre on Thursday 14th October 2021! Both artists are hard-hitters on the scene with huge hits to their names as solo performers and will each be performing tracks from their extensive catalogs of albums and mixtapes! They'll also be performing from their number one collab album The Voice of the Heroes! 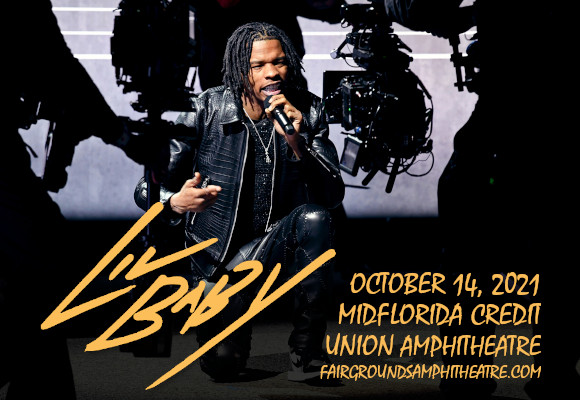 Hailing from Atlanta, Georgia, trap artist Lil Baby released his debut mixtape, Perfect Timing in 2015. Although the record made an impact on the local scene, it was his third mixtape (2017’s Too Hard) that began to bring him mainstream recognition when his single "Freestyle" became a YouTube hit. A buzz began to grow around the artist and when he released his debut studio album Harder Than Ever later that year, it debuted at number three on the Billboard 200. The album went platinum and launched several singles, including the Drake collaboration "Yes Indeed", which peaked at six on the Billboard Hot 100. He kept momentum up by releasing a further two mixapes that year: Drip Harder, which launched the single "Drip Too Hard" (which peaked at number four on the Billboard Hot 100) and Street Gossip, which reached number two on the Billboard 200. His sophomore studio album, My Turn (2020), peaked at the top spot on the Billboard 200 and is certified triple-platinum, launching two top-ten hits: "We Paid" (with 42 Dugg) and "The Bigger Picture", which peaked at number three on the Hot 100, becoming his highest-charting song as a lead artist. June 2021 brought the release of a collaborative album Lil Durk called The Voice of the Heroes. The album reached number one on both the Billboard 200 and the Top R&B/Hip-Hop Albums charts.