Lady Antebellum will be stopping in at MidFlorida Credit Union Amphitheatre on Saturday 1st August 2020 as part of their Ocean Tour, promoting last year's release of the same name, which was the country trio's eighth studio album! The Nashville hit-makers will be performing tracks from the LP, including lead single and number one hit "What If I Never Get Over You," "What I'm Leaving For," "Pictures," "Boots," and "Be Patient with My Love!" Lady Antebellum always bring the party, and this year's tour will be the biggest and best yet, with fellow country acts Jake Owen & Maddie and Tae joining them to make the country line-up of the summer! 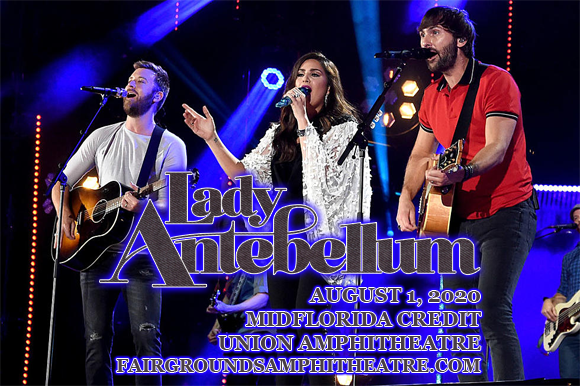 Within the space of three years, Lady Antebellum rose through the ranks from up-and-comers on the Nashville music circuit to platinum-certified country stars. The trio, consisting of Hillary Scott, Charles Kelley, and Dave Haywood, formed in 2006 and had their breakthrough the following year as featured artists on Jim Brickman’s single, “Never Alone,” which reached number 14 on the Billboard Adult Contemporary chart and led to a record deal with Capitol Nashville for the group. In 2008, they released their self-titled debut album, which placed them as new country sensations, reaching number four on the Billboard Hot 100 and debuting at number one on the Billboard Top Country Albums chart, making them the first new duo or group to do so. Lady Antebellum had similar success with their following two albums, which were both certified platinum by the RIAA. To date, the band has enjoyed huge success, with 16 singles on the Hot Country Songs and Country Airplay charts, including nine number ones. They have sold over 12.5 million digital singles and 10 million albums in the US alone to date, and have won 51 awards, including seven Grammy Awards. 2019 brought the release of their latest album, Ocean.