It's a double-whammy of country awesomeness as Lady Antebellum and Darius Rucker bring their co-headlining Summer Plays On Tour to MidFlorida Credit Union Amphitheatre on Friday 28th September 2018! The Grammy Award-winning acts will be performing a full set each, plus support from rising star Russell Dickerson, and who knows, fans may even be lucky enough to enjoy a collaboration from these chart-topping performers! 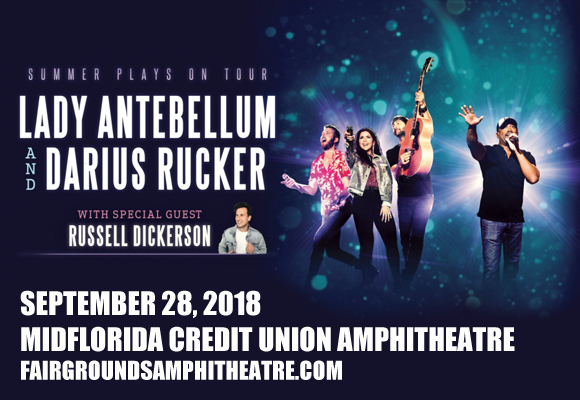 Seven-time Grammy Award-winning country trio Lady Antebellum first came to public attention when they featured as vocalists on the Jim Brickman single “Never Alone” in 2007. Later that year the band signed a deal with Capitol Nashville, releasing their self-titled debut in 2008. The album reached number four on the Billboard Hot 100 and debuted at number one on the Billboard Top Country Albums chart, which was a first in the history of the chart. The group's first three albums are certified platinum or higher by the RIAA and the band have sold over 12.5 million digital singles and 10 million albums in the United States. Lady Antebellum have charted sixteen singles on the Hot Country Songs and Country Airplay charts to date, including nine number ones. Their latest album, Heartbreak, was released in 2017.