Kendrick Lamar, SZA & Schoolboy Q comes to MidFlorida Credit Union Amphitheatre on Tuesday 22nd May 2018!! Big news for Kendrick Lamar fans as the rumours are confirmed to be true! As he sets off to embark on a North American tour, he is bound to blow your mind! Tickets are on sale now – have you got yours?! 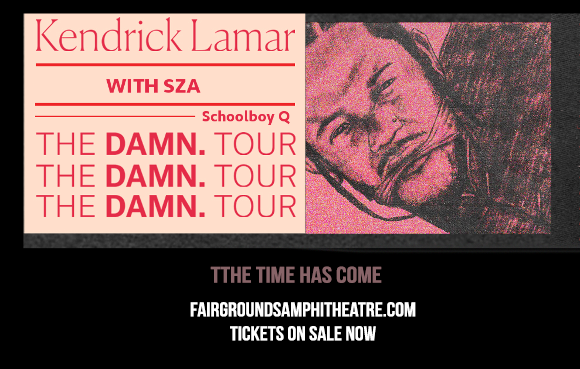 The American Rapper and Songwriter – Kendrick Lamar has had every body talking, music critics, fans and fellow bands and artists alike! And it's clear to see why – with an outstanding ability on his lyrics and flow, this guy has always been a one to watch!

Growing up in Compton, California, Lamar surrounded himself with music and from an early age, wrote and produced what he was about! Under the name, K-Dot, he showcased himself with a mixtape that garnered local attention and led to his signing with indie record label Top Dawg Entertainment!

In 2010 his career began to grow and with his first proper release of Overly Dedicated it put him on the map and it was just a matter of time that Kendrick Lamar would be creeping up from the underground to the mainstream. The next year, he independently released his studio album, Section.80, this of course included the single, "HiiiPoWeR". With the help of the internet and his online following, Kendrick was a known name within the hip hop industry and was already working with The Game, Busta Rhymes, and Snoop Dogg.