Jason Aldean returns to the stage this summer with the We Back Tour! The country megastar's shows are as big, bold and brilliant as his smash hit singles, and he always brings his A-game, giving the fans a non-stop party! For this show, he'll be performing tracks from his latest album, 9, including the lead single, plus plenty of his chart-toppers! He'll be supported by a string of special guests, including country pop singer-songwriter Brett Young, "Drunk Me" singer Mitchell Tenpenny, & Dee Jay Silver! Aldean will be taking to the stage at MidFlorida Credit Union Amphitheatre on Friday 11th September 2020! 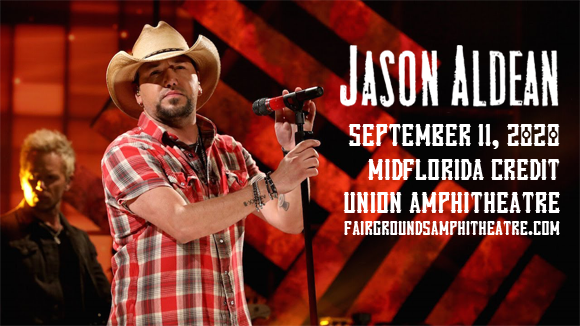 Jason Aldean is one of country music's top artists, with 27 top ten singles, including nineteen number ones, three platinum-certified albums, and two multi-platinum-selling LPs – 2012's double-platinum certified album Night Train and the 2010 quadruple-platinum-selling album My Kinda Party. Aldean's story is not one of overnight success, however – the country star began his career performing the bars and clubs of Atlanta, Georgia, before moving to Nashville in 1998 after signing with Warner Chappell. His record deal was unfruitful, and after the blow of another dropped record contract and several rejections from other labels, by 2005 the artist was ready to return to Georgia, giving himself six months to make his way in Music City. Within five weeks, he signed with Broken Bow Records and in June of that year he released his smash hit self-titled debut album, charting his first number-one single with “Why”. The rest, as they say, is history! Aldean's most recent release is 2019's 9.