Are you ready for the incredible Janet Jackson?? The globally renowned pop superstar is back on tour in 2018 hitting the MidFlorida Credit Union Amphitheatre on Tuesday 7th August! If you're a fan of Janet Jackson, then you can’t afford to miss the State Of The World tour – tickets will disappear in an instant for this so don’t miss out!! Book your Janet Jackson tickets today!! 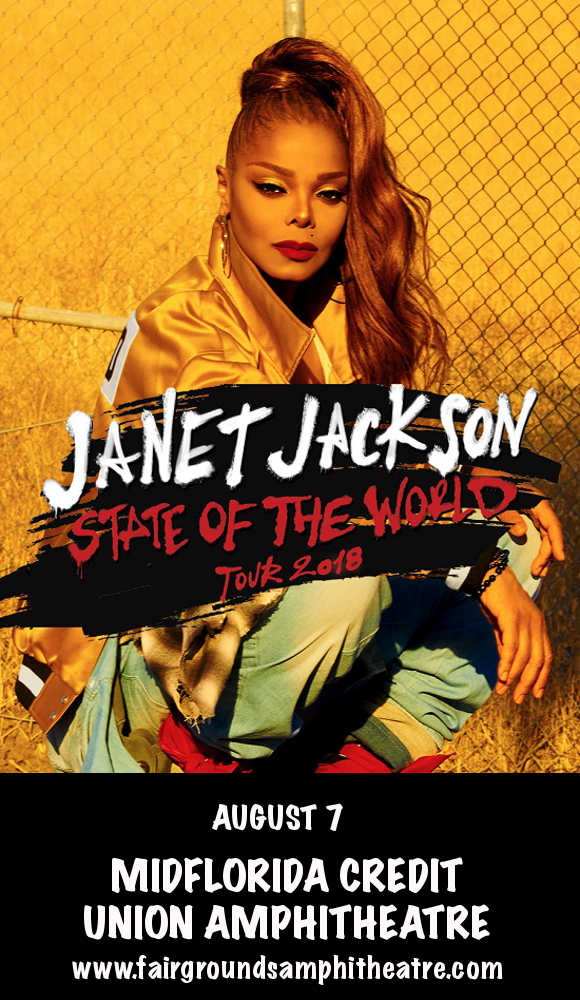 The seventh child of the iconic Jackson family, Janet Jackson has more than proved herself an equal to her world-famous brother Michael. Releasing her first album in 1982, her third album, “Control,” established her as a breakthrough force in the world of pop music. Proving herself as a strong, confident young woman, Janet Jackson smoothly transitioned into a sex symbol a few years later with her album “Janet,” a liberating and inspiring role model for countless women of the time.

Originally a continuation of her 2017 “Unbreakable” tour, the new title of her 2018 tour comes from her single in 1991 of the same name, and reflects a thematic change to address social issues. The themes of the tour include racism, domestic violence, homophobia and police brutality, shown through the visual aspects of the concert as well as the music – expect a show that is as thought-provoking as it is entertaining. And coming from one of the greatest stars in music, it promises to be a truly incredible show.

No Janet Jackson fan can afford to miss this – get your tickets NOW while they last!!