Two bands that continue to be as funky fresh as they were when they first toured together nearly 20 years ago, Incubus and 311 are about to rock your world on a co-headlining tour that comes to MidFlorida Credit Union Amphitheatre on Sunday 2nd August 2020! Older, wiser and with a mighty back catalog of hit songs under their belt, these two alt-rock groups still know had to tear up the stage, and still have legions of fans hanging on their every note! LA alt-rockers Badflower will be opening the show for the two bands! 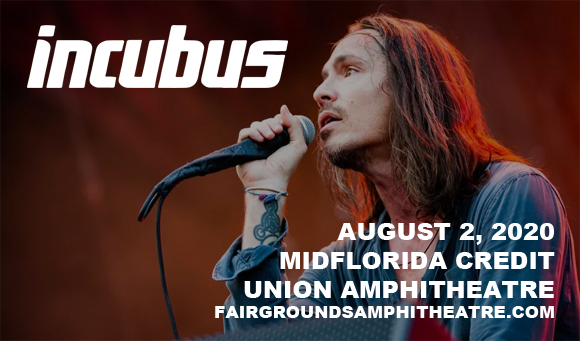 Formed in Omaha, Nebraska in 1988, 311 had a breakout hit with their 1995 self-titled third studio album, which launched the hit radio singles "Down" and "All Mixed Up". After that, the band released nine consecutive top 10 albums on the Billboard 200 over the next decade, proving that their laid-back blend of reggae, hip hop, funk, metal and pop is timeless. The group's most recent album is 2019's Voyager.

Incubus broke into the mainstream with their 1999 hit single "Drive," which was their first top 10 single on the Billboard Hot 100. The group's five subsequent albums all hit the top 5 on the Billboard 200, with three of them reaching the top two (Morning View, A Crow Left of the Murder…, If Not Now, When?) and 2006's Light Grenades hitting the top spot. Taking influence from a wide variety of genres, including funk, thrash, pop, hip hop, techno and more, Incubus have continued to evolve as musical innovators throughout their career. In 2020, they release their follow up to the 2015 EP Trust Fall (Side A), with Trust Fall (Side B).