Classic rockers Heart are back on the road! The Wilson sisters bring their Love Alive tour to MidFlorida Credit Union Amphitheatre on Saturday 17th August 2019, and they've curated an incredible female-fronted support line-up for the stint! This show will feature special guests Joan Jett and the Blackhearts & Elle King, so get ready for a night of huge voices and powerful attitude! 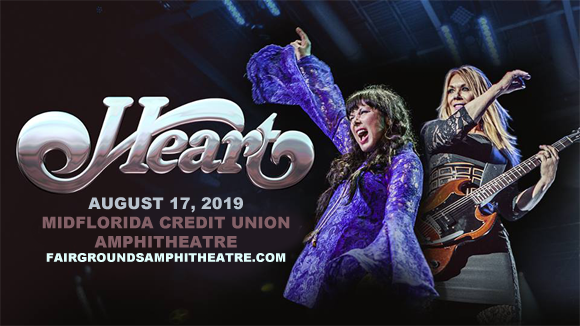 Known for 20 top 40 singles, including “Alone”, “Barracuda”, “Crazy On You” and “These Dreams”, Heart is an American rock band, formed in 1973. The band's most constant members are sisters Ann Wilson (lead vocals, flute and guitar) and Nancy Wilson (guitar, mandolin and vocals), and they are credited with being the first female-fronted hard rock band. Over its five-decade career, Heart has sold more than 35 million albums worldwide, with over 22.5 million in album sales in the U.S. The band has charted seven top 10 albums, and has charted top 10 albums on the Billboard 200 in the 1970s, 1980s, 1990s, and 2010s – the longest span of top 10 albums by a female-fronted band. The band has received four Grammy Award-nominations and was inducted into the Rock and Roll Hall of Fame in 2013. Heart's 16th and most recent studio album is 2016's Beautiful Broken.