Hall and Oates have still got it! This year, they celebrate 50 years in the industry, but their live shows have never been better! The soul-pop twosome are adept at whipping the crowd into a singing, dancing frenzy with their chart-topping hits that are impossible not to groove along to! The beloved duo comes to MidFlorida Credit Union Amphitheatre on Saturday 15th August 2020, and they'll be bringing very special guest support acts KT Tunstall & Squeeze along too!

“Can’t wait to get out there and have some fun playing with my friends to all of my friends,” says Hall.

“I’m really looking forward to a big time 2020 tour!” adds Oates. “Having KT Tunstall and Squeeze on the bill with us is just gonna make for an amazing night of music. Can’t wait to see you all on the road.” 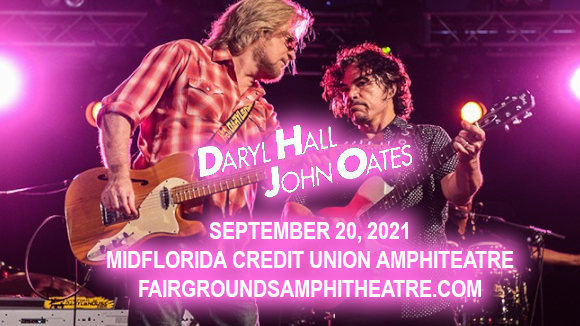 Like peanut butter and jelly, some pairings just stand the test of time, and that is very much the case with blue-eyed soul duo Hall and Oates. Having met at Philadelphia's Temple University in the late-1960s, they began working together in 1970 and had their breakthrough hit six years later with the track "Sara Smile," from their self-titled fourth studio album. After that, the hits came thick and fast: 34 chart hits on the US Billboard Hot 100, including six number one singles. The duo have had seven RIAA platinum albums and six RIAA gold albums throughout their career, and have sold over 40 million records, making them them the best selling music duo in history. They've been honored for their work with inductions into the Songwriter's and Rock and Roll Halls of Fame, and with a star on the Hollywood Walk of Fame.