With the hottest names in hiphop, the Endless Summer Tour will get you sweating like a heatwave as you dance to the sounds of G-Eazy, Logic, Yo Gotti & YG! Two superstar rappers, G-Eazy and Logic, have joined forces to bring you a night of scorching tunes! Head to MidFlorida Credit Union Amphitheatre on Sunday 17th July 2016 and drop it like it's hot! 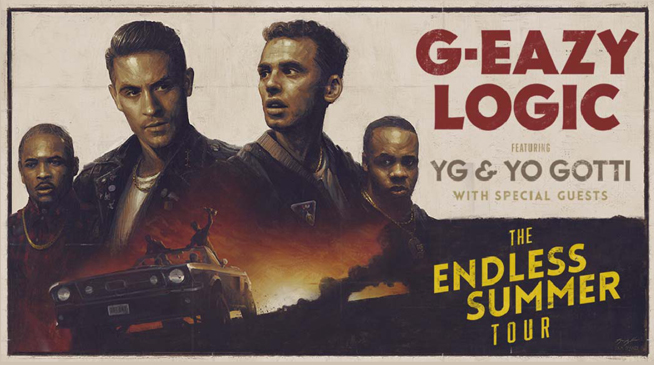 Robert Bryson Hall II, also known as Logic, is an American rapper hailing from Maryland. Logic began rapping as early as 13, and by age 16, in 2009 he released his first mixtape under the name Psychological, which was titled Psychological – Logic: The Mixtape. On the strength of this first release, Logic opened for Pitbull, EPMD, Method Man, Redman, and Ludacris at a show in Maryland that year. After a change of name to Logic, he released his debut official mixtape Young, Broke and Infamous in December 2010. Three years later, Logic signed to Def Jam Recordings, with whom he has released two studio albums, the most recent being The Incredible True Story. His debut studio album went on to sell over 70,000 copies in its first week, and his most recent topped the rap charts with 125,000 equivalent album sales in its first week.