Get ready for an incredible line-up as one of the world's best-selling bands of all time, Foreigner, take to the road to celebrate their 40th anniversary! The hard rock legends will be joined by Cheap Trick & Jason Bonham's Led Zeppelin Experience, for the hottest rock show of the year! Make sure you head to MidFlorida Credit Union Amphitheatre on Wednesday 2nd August 2017! 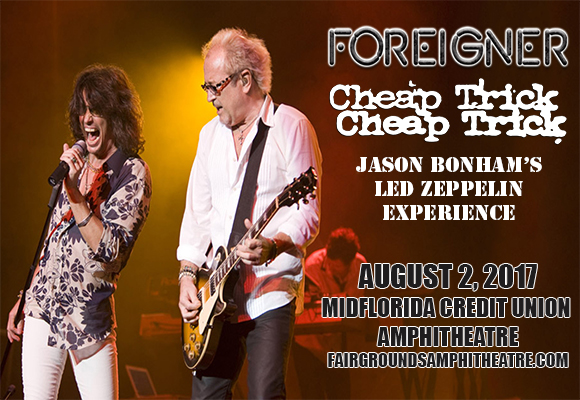 Formed originally of three Englishmen (veteran musician Mick Jones and ex-King Crimson member Ian McDonald and the band's original drummer Dennis Elliott), as well as Americans Lou Gramm, Al Greenwood and Ed Gagliardi, British-American hard rock band Foreigner chose their name as a representation of their international roots. Beginning in New York City in 1976, the band's self-titled debut album was released in March 1977 and sold more than four million copies in the United States, staying in the Top 20 for a year, and launching the hits "Feels Like the First Time", "Cold as Ice" and "Long, Long Way from Home". Their biggest hit single, "I Want to Know What Love Is", topped the United Kingdom and United States Charts among others. Foreigner are one of the world's best-selling bands of all time with worldwide sales of more than 80 million records, including 37.5 million records in the US.