Alternative metal fans, get ready for the show of a lifetime!! Five Finger Death Punch and Breaking Benjamin are on tour together in 2018 with their new albums – and they’re on their way tot eh MidFlorida Credit Union Amphitheatre for Saturday 11th August 2018!! Be quick about snapping up those tickets, because they won’t last long – on sale NOW!!! 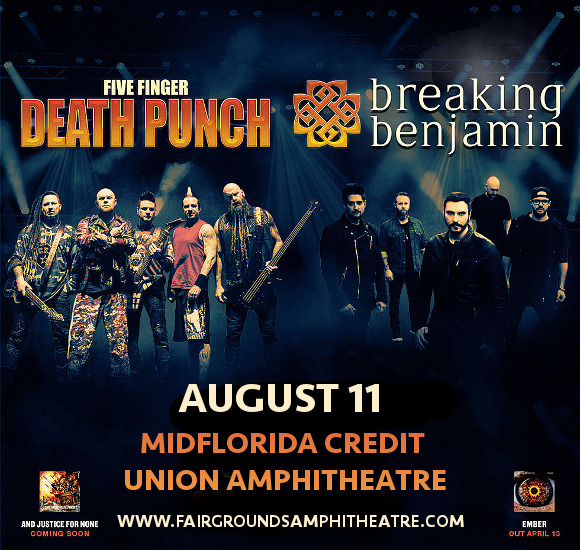 Blasting onto the metal scene in 2007 with “The Way Of The Fist,” Five Finger Death Punch have paved the way for groove metal bands, establishing their distinct sounds with their follow up albums “War Is The Answer,” and “American Capitalist”. Five Finger Death Punch are now about to release their seventh album, “And Justice For None,” which, according to bassist Chris Kael, is exactly what fans want and expect from the band. “Five gold records, one platinum record, why would you stray from that kind of sound when those people have been out there supporting you the whole time and come to expect 'that sound' from us?’” he asked in an interview. “It's all about great songs. That's what we try to do. We're always trying to find that perfect song. I think each record, we get closer and closer and closer to that elusive perfect song.”

Get ready to hear that closeness live – it’s going to be epic!! What are you waiting for?? Grab your tickets TODAY!!