Ready for the hottest country show of the year? Well you’re in luck; Dierks Bentley, Cole Swindell and Jon Pardi are making their way to MidFlorida Credit Union Amphitheatre for Friday 16th June 2017!! Make sure you’re there to catch a slice of the action – click the “Buy Tickets” button above to get yours today!! 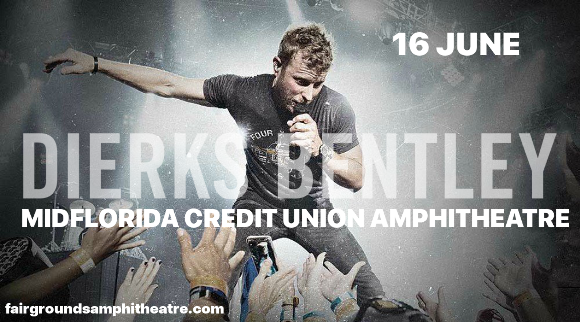 A true legend in country and his distinctive style of bluegrass, Arizona-born Dierks Bentley’s very first album (and second!) was certified platinum in the United States, followed by a stream of top-charting singles and albums. 15 singles reached number one on the Country Airplay and Hot Country Songs charts, out of 25 which charted in the top 40, including “Am I The Only One,” “Settle For A Slowdown,” “Feel That Fire,” “Somewhere On A Beach,” and “What Was I Thinkin’”.
In support is Cole Swindell, who has charted in the top 5 with memorable songs such as “Ain’t Worth The Whiskey,” “Middle Of A Memory,” and “Chillin’ It”. He has written for massive artists including Thomas Rhett, Luke Bryan, Scotty McCreery and Craig Campbell!!

And finally we have another smash hit, Nashville-signed artist, the incredible singer-songwriter and producer Jon Pardi. Writing by age 12 and having formed his first band by the age of 14, he moved to Nashville to pursue music, to massive success, having since released two studio albums; “Write You A Song,” and “California Sunrise,” the singles of which both charted on the Hot Country Songs and Country Airplay Charts.
So many chart-topping artists don’t come together often – this will be the show of a lifetime! Grab your tickets quickly before they sell out!!