Dierks Bentley is back on the road this summer, coming to MidFlorida Credit Union Amphitheatre on Saturday 15th September 2018 on the Mountain High Tour! Bentley is an incredible live performer, known for bringing a great line-up on his stints and this year looks to be no different, with CMA Award-winning duo Brothers Osborne & rising stars LANCO in tow! And it looks like this year's show will be a little left of center:

“It’s like I’m back to where I was when I first started touring — where you have no choice but to take chances because you’re trying to carve out your own niche. Now, we’ve had so much success and the only way to keep it interesting for me and the band is to keep taking chances,” says Bentley. 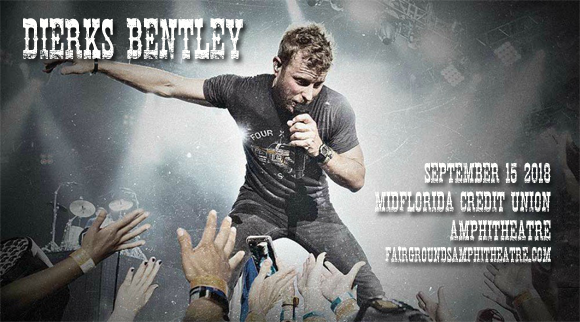 Dierks Bentley is an American country music singer and songwriter, who released his eponymous debut album in 2003 after signing to Capitol Nashville. The album went platinum, marking the beginning of an exciting career for Bentley. To date, he has released nine studio albums, including a greatest-hits album, and has charted twenty five singles on the Hot Country Songs and Country Airplay charts, including fifteen number ones. Bentley's tenth album, The Mountain, is slated for a 2018 release.