It’s that time of year again – get ready to welcome the Dave Matthews Band!! Back from their one-year rest after relentless yearly touring, they’re making their presence known in a big way with a colossal North American tour and accompanying new album to boot! The Dave Matthews Band is coming to the MidFlorida Credit Union Amphitheatre on Wednesday 25th July 2018 for one fantastic night of the very best live jam music that money can buy! And we’d suggest you buy it quick, as the window of opportunity to do that won’t be open for long!! Hit the “Buy Tickets” button NOW to get your Dave Matthews Band tickets TODAY! 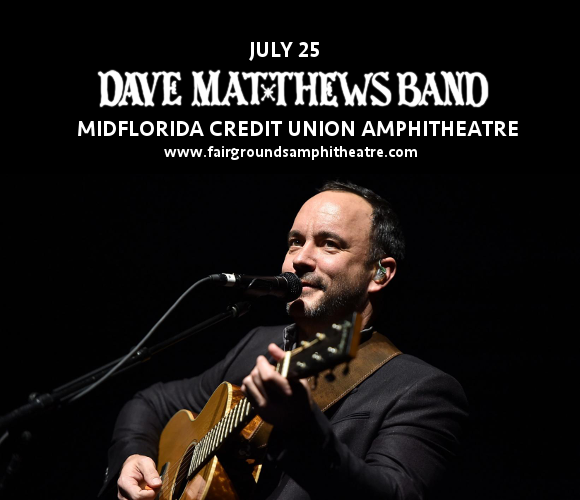 Spanning the course of four months, he enormous tour will begin May 18 at Woodlands Pavilion, Texas, and finish up on September the 10th at the Hollywood Bowl in Los Angeles, hitting all the major cities in the US including a special 3-night run at the The Gorge in Quincy, as per the now well-established custom between the Dave Matthews Band and their fans!!

Known for never playing a show the same way twice, fans can expect old favorites, new songs from the new album, and extensive improvised sections. In addition, there will be an amazing visual light show to accompany the music!!
Don’t miss out on your change to see the Dave Matthews Band live – get your tickets to see them straight away, while you still can!!