Nashville native Chris Young was born to sing the music he grew up on, so it's only right that he comes to MidFlorida Credit Union Amphitheatre on Friday 13th September 2019 on the Raised On Country Tour! Raised On Country is also the name of Young most recent album, which he will be performing from! Not only will he bring a headlining set to the table, but he'll be supported by opening act Chris Janson, plus special guest LoCash! 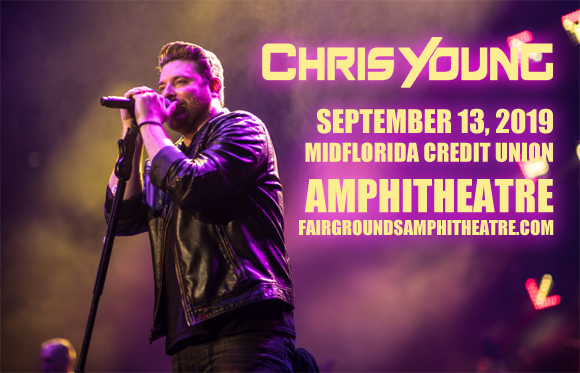 Rising to prominence as the winner of the fourth season of USA Network's reality television singing competition Nashville Star, American country music singer and songwriter Chris Young has established himself as “one of country music’s most reliable hit makers” (USA Today). That same year, Young's self-titled RCA Nashville debut album earned him the title of country’s best-selling new male artist of 2006. Young's 2009 sophomore album, The Man I Want to Be, fared even better, with three number-one singles and a Grammy Award nomination. Today, seven albums into his career, Young has garnered six number-one singles and seven Gold/Platinum certifications. In 2017, he received his greatest honor when he was invited by country legend Vince Gill to become a member of the Grand Ole Opry, and was officially inducted by Brad Paisley.