It's a double-whammy of nostalgic, bluesy rock as Chicago – The Band & The Doobie Brothers head to MidFlorida Credit Union Amphitheatre on Thursday 29th June 2017 as part of a joint-headliner tour that will get the crowd going wild! Both bands have had long and exciting careers in the music industry, generating hit after solid gold hit, so don't miss your chance to see them live!!! 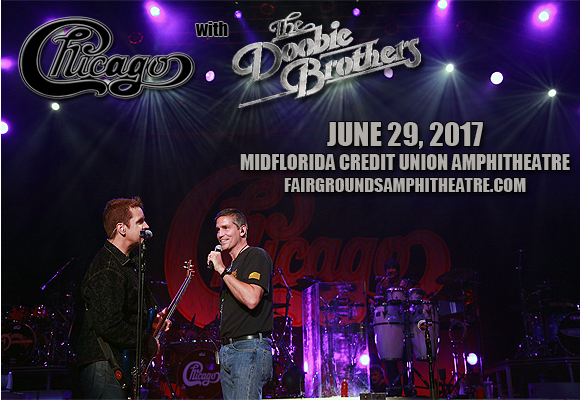 With record sales of 100,000,000, 21 Top 10 singles, 5 consecutive Number One albums, 11 Number One Singles and 5 Gold singles, Chicago are one of the world's best-selling bands of all time. Chicago is the first American band to chart Top 40 albums in five decades – a landmark accomplishment – and an incredible 25 of their 33 albums have been certified platinum. The group, which started in 1967 as a politically driven, experimental "rock and roll band with horns," is second only to the Beach Boys in Billboard singles and albums chart success among American bands, and was inducted into the Rock and Roll Hall of Fame on April 8, 2016 at Barclays Center in Brooklyn, New York.