Country Music Hall of Famers Brooks and Dunn are working hard for two retirees! The Grammy Award-winning pair returned to music in 2015, after their retirement in 2009, to join Reba McEntire for country music's longest-running Las Vegas residency. Now, they're back on the road for the first time in over a decade, and they'll be stopping by at MidFlorida Credit Union Amphitheatre on Friday 8th October 2021, where they'll perform a set of fan favorite Brooks and Dunn hits, particularly tracks from their 2019 smash hit album Reboot! 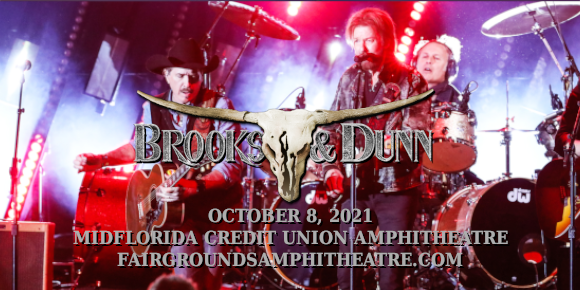 With their signature mix of honky tonk, pop, rock and country, Brooks & Dunn (singers and guitarists Kix Brooks and Ronnie Dunn) exploded in the 1990s, kicking off the line-dancing craze that swept through country bars across the nation. Throughout their career, they became the best-selling duo in music history, and out of their 50 singles released, 20 of them have hit number one on the Hot Country Songs chart, with a further 19 reaching the top 10. In addition, 10 of their 12 studio albums have been certified multi-platinum or higher by the RIAA. Inducted in the Country Music Hall of Fame in 2019, the duo has also been honoured with 17 Country Music Association awards, 26 Academy of Country Music awards and two Grammy Awards over the course of their career. They retired in 2009, only to return to music in 2015, embarking upon a Las Vegas residency with fellow country artist Reba McEntire.