Alan Jackson fans get excited!! The country legend is coming to MidFlorida Credit Union Amphitheatre on Friday 11th May 2018, with news of a brand new album scheduled for release in 2018!! Get ready to hear all the new songs live and sing along with your favorite country star – grab your Alan Jackson tickets NOW before they sell out!! 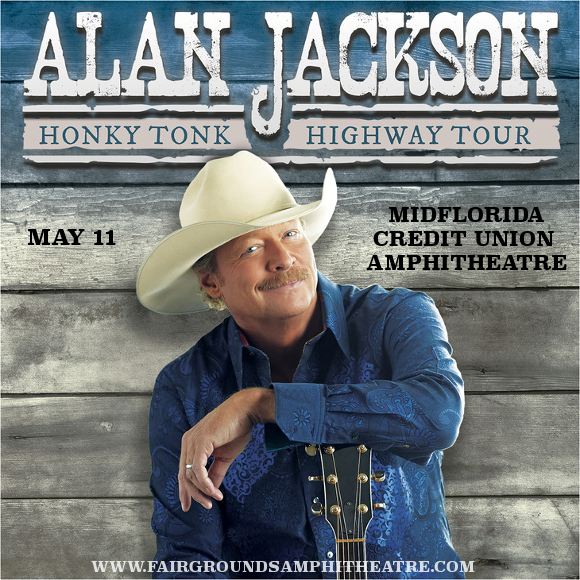 In October last year, Alan Jackson dropped the first single from the new album, “The Older I Get,” just prior to his hard-earned induction into the Country Music Hall Of Fame. Originally written by Adam Wright, Hailey Whitters and Sarah Allison Turner, “The Older I Get,” talks about the process of ageing, but Alan Jackson’s version puts a more positive spin on the song. “This song reflects a lot of how I feel these days,” the singer-songwriter said, when asked about the themes behind the new material. “It’s a good song. I really liked it, but the message was a little different when I first heard it. I thought maybe it could be a little more positive about being older and wiser and more content, so they rewrote a few things, and this is how it ended up.”

With just 130 members in the Country Music Hall Of Fame, the induction is a real indication of the public and critical feeling for Alan Jackson’s authenticity and integrity as a country artist. Don’t miss out on your chance to catch him live – hurry and grab those tickets!!