Exciting announcement! As the 2017 97X Next Big Thing IS HERE and the line-up is even better than before! Rock fans get ready as the unmissable – Paramore, Walk The Moon, Vance Joy & Portugal. The Man are coming to MidFlorida Credit Union Amphitheatre on Sunday 3rd December 2017! That's right, it's time to catch 97X Next Big Thing LIVE as it brings a great selection of energetic bands… be sure to book your tickets as they are bound to sell out! 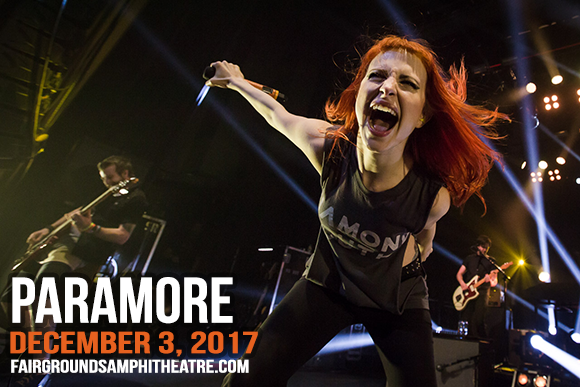 The Tennessee rockers, Paramore are one of the biggest pop punk bands of the 2000's.. since their first debut all the way back in 2004, the band have rocked stages all around the globe, toured like crazy, sustained an incredible dedicated fan following and released hit albums along the way! Led of course by their lead singer, Hayley Williams and the other members; guitarist Taylor York and drummer Zac Farro. Their first smash hit single, "Pressure" put them on the map and their first album recieved an impressive gold certification! But it wasn't until their second release of, 'Riot!' – probably their most recognizable record as it included many of their greatest singles such as; "Misery Business", "Crushcrushcrush", and "That's What You Get", Riot! This alone pushed them into stardom and gave them a Grammy Award also for their hard work. Since then they have continued to earn Grammy's for tracks such as; "Still Into You" and "Ain't It Fun", with the latter winning the Grammy Award for Best Rock Song.

Always at the top of their game, Paramore continue to travel across North America to perform to their adoring fans… catch them LIVE at this year's 97X Next Big Thing!!