30 Seconds To Mars are back with their first concert tour in three years, promoting their hugely exciting upcoming album, Monolith! Jared and the band will be rocking the MidFlorida Credit Union Amphitheatre stage on Saturday 30th June 2018, and they'll be joined by pop-rockers Walk The Moon and indie-poppers MisterWives for an eclectic and energetic show that'll blow you away! 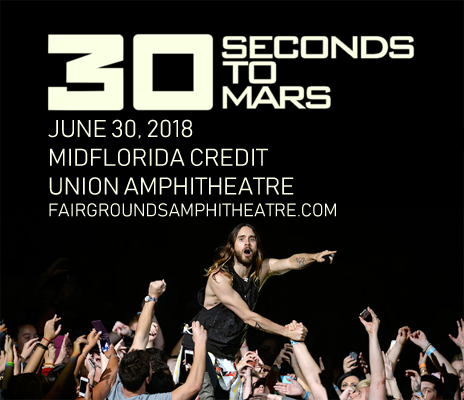 American rock band 30 Seconds to Mars formed in Los Angeles, California in 1998 and consists of Jared Leto (lead vocals, guitar, bass, keyboards), Shannon Leto (drums, percussion) and Tomo Miličević(lead guitar, bass, violin, keyboards, other instruments). Released in 2002, the band's eponymous debut album was received well by critics, but it was the band's 2005 follow-up album, A Beautiful Lie, that brought them success both critically and commercially, going platinum in North America and receiving multiple certifications worldwide. With 2009's This Is War, the band favored a more experimental, progressive sound, marking a significant change in musical direction. The making of the album became the subject of the award-winning 2012 documentary film Artifact. The band has sold fifteen million albums worldwide and their fifth studio album, Monolith, is slated for release in 2018.